The Inn at the Terminus of the King’s Highway……

Back in the early 1900’s, in the days when Provincetown was considered a frontier town, it flourished and gained fame mainly as a remote artist’s colony and summertime resort for Boston’s well-to-do families. With the introduction and popularity of the touring car, word quickly spread about the unique character of this frontier town where the land meets the water.

During the 1920’s, the town of Provincetown became a summertime destination for the city folk of Boston and New York. One adventurous soul came up with the idea of building a hotel at the end of the King’s Highway in the far west end of Provincetown. The location is where the Pilgrims first landed in the new world and drew up and signed the historic Mayflower Compact (as well as tended to some overdue laundry).

Mural depicting the “first laundry day” of the Pilgrim in 1620

The year was 1925 and a new luxurious hotel open its doors for the first time with 28 guest rooms and a formal dining room with views of Provincetown, the harbor and Cape Cod Bay, in 1935, the Inn was purchased by “the bossman”, Chester Peck. The Inn quickly became a success story and gained a reputation for its generous hospitality and was a “must-stop” for the many stage and screen personalities who visited and performed in Provincetown as well as the many summer tourist visiting town.

Like the rest of the nation during World War II, the Provincetown Inn was pressed into service for our country. In the spring of 1942, the Coast Guard contracted the building for use as a training ground for new recruits to help protect the eastern seaboard from invasion.

After the war, Chester Peck decided to update and expand the original hotel, adding on a new section of rooms on the second floor known as “ the Pine & Perry Rooms”. It was during the 1950’s that the Inn slowly began to take on its present look. In 1957, large rocks and other fill were brought in to create the peninsula for the motel section of rooms. Sand was used from the “high dune” results were a new 500 foot beachhead, Olympic-sized pool (in the shape of a pilgrim’s hat), as well as shuffleboard, tennis and a boat launch. The following year, the motel section of the property was built, surrounding the perimeter of the new parking lot and adding 32 rooms to the hotel.

During this time, the Provincetown Inn truly became a summertime resort. The Inn was home to three separate dining rooms, a night club, a gift shop, as well as a dress shop, a barber shop and a salon. They even rented scooters on the property.

During the late 1960’s, Chester Peck decided to make the Provincetown Inn a year round resort. The pool was enclosed. A sauna, 6 lane bowling alley and a night club were added with the now indoor pool. It was during this time that our murals were painted by renowned local artist, Don Aikens. The murals decorate walls throughout the property depicting life in the bye-gone days of Provincetown. The murals have become quite famous and it is not uncommon for tour groups who are visiting town for the day to make a stop to view and appreciate the murals.

After almost 40 years of overseeing the Provincetown Inn, Chester Peck decided to retire. He sold the property in 1972 to several investors for $1,857,000 (roughly 8 million dollars by today’s standards). In 1977, Brooke Evans purchased the hotel. He, with his family, continued the hospitality standards established by Chester Peck. The hotel continued to cater to tourists and celebrities alike. Brooke, wanting to add top line entertainment to the resort, brought in national acts such as Phyllis Diller, Wayland Flowers & Madam, “Marvelous” Marvin Hagler trained at the Inn for many of his prize fights. He also used to run through the Provincetown dunes as a strengthening exercise.

In 1997, the structure enclosing the pool was removed, grass was planted and the large lawn area that you see today was created. The newly outdoor pool was refurbished and a bar and grill were added. While some might lament the loss of the town’s only bowling alley, the views created looking back towards Provincetown, the harbor, and Cape Cod Bay from this vantage point are some of the finest in town.

Today, Brooke’s son, Evan Evans, runs the day to day operations of the Inn. While many things have changed over the years at the Provincetown Inn, our commitment to hospitality remains. Whether you are here for vacation, wedding, business conference, or weekend getaway, we at the Provincetown Inn are dedicated to creating an unforgettable Cape Cod experience here at the Hotel at the terminus of the King’s Highway. 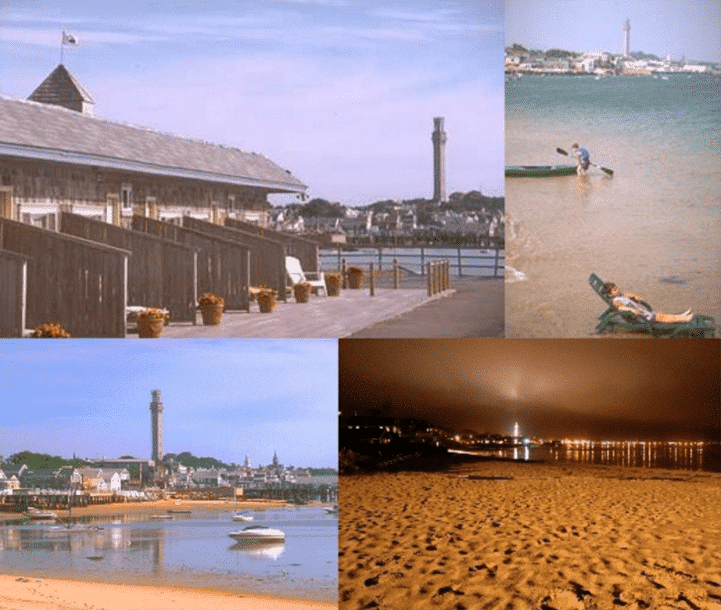 The Murals at the Provincetown Inn
The Murals throughout the Provincetown Inn were created by local Cape Cod artist Don Aikens beginning in 1966 finishing six years later. They depict life in Provincetown in the early 20th century. Many are based on old photographs and postcards. One exceptional mural is located in the Inn Pub behind the bar. Come stop in and see this mural of Commercial consisting of six separate painted layers for a 3-D effect.

This is just a small sampling of the many murals in the Provincetown Inn.
Explore Provincetown’s history on our walls throughout the property.